Outriders may have released on April 1st, but wrangling with its class options is no joke. The co-operative role-playing game is a third-person shooter set on a distant Earth-like planet called Enoch.

The premise is that by the middle of the 21st century, the Earth is no longer habitable due to the climate crisis, and the Outriders are a team of elite soldiers scouting the new planet. People who have been exposed to a mysterious ‘Anomaly’ on Enoch develop supernatural powers.

This is where the Outrider classes come into play.

While there were some initial teething problems with the Outriders servers, it appears that they’re now stable enough that players can sink their teeth into the action. One useful tip for the game is to make use of its demo.

It allows you to create a new character and skip straight to gameplay so you can get a feel for their abilities before committing. Given the main campaign is up to 40 hours, it’s worth being cautious, but once you’re happy you can transfer your progress over to the main game.

While there are big differences between the gameplay style of each of the four classes, your progression in each work around the same model. Each class has eight skills that can be equipped and leveled up, as well as a class tree of abilities that grows as you level up.

The game can be played solo or with up to two other players. In the FAQ section on the official Outriders  site, it states that they allowed for groups of 3 players despite there being 4 character classes as “with all the movement skills and visual effects from powers when playing with four people the battlefield got way too chaotic and hard to read.”

Outriders has been compared to live service games such as Destiny, but Polish developer People Can Fly has insisted that it’s not a ‘game as service.’ This means that Outriders has been designed with an endgame in mind, and won’t rely on live events.

The developers have also compared Outriders to Apocalypse Now, Heart of Darkness, and Joker, so take from that what you will. With the basics now established, it’s time to meet the Outriders.

Like their name suggests, the Trickster is a difficult class to handle, but it’s also the most rewarding for solo play. Trickster can use the Hunt the Prey skill to teleport behind an enemy and take them out at close range.

They are better suited to melee fighting that exploits the hit and run nature of those time and space-bending abilities. If you play this class, you’re also rewarded for taking out enemies at close range by having your health topped up and some shielding being granted to you.

The Devastator is also a close-range class, but rather than being built for agility like Trickster, they’re the tank of the group. The Devastator is designed to absorb hits, resistant to 65% of damage for eight seconds with the Golem skill.

Devastator is a very down-to-earth character – the Gravity Leap skill launches you into the air so you can crash down on your opponents. This class can also recover health from vanquished enemies in close range. Their defensive potential probably lends them best to co-op play.

If you like playing with fire, the Pyromancer may be the class for you. As a fire conjurer, they are well-suited for medium-range attacks and can also recover health when a marked enemy is killed.

These abilities make the Pyromancer particularly well-suited to co-op play as they can provide support to their teammates from afar and death to their enemies with fiery flames. 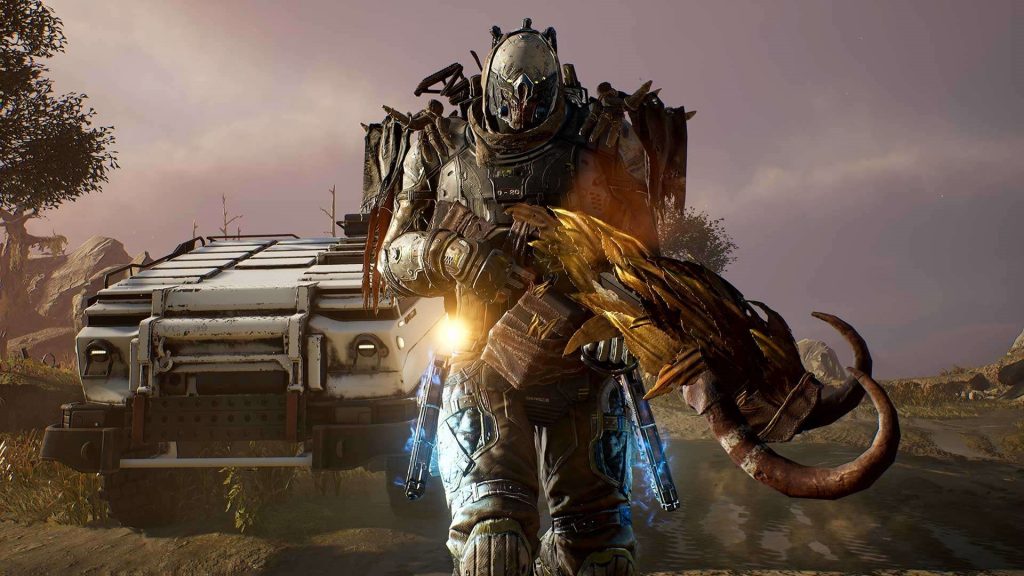 Last but not least – it’s the Technomancer. This class, like its fiery counterpart, is all about long-range attacks. They’re also arguably the best support class, as it’s the only type that can heal other team members currently.

This makes the Technomancer really useful in multiplayer but less so in a solo campaign. The Technomancer can also aid allies further by using the Anomaly to animate constructs. Unsurprisingly, they’re a tech wizard that can use gadgets such as turrets to increase remote firepower.

Outriders is the latest in a large stable of cooperative third-person shooters, so it’ll be interesting to see whether it fizzles out or treads new ground. With the different classes on offer, at least we know that Enoch isn’t a one-horse town.